For Anne and Allison... 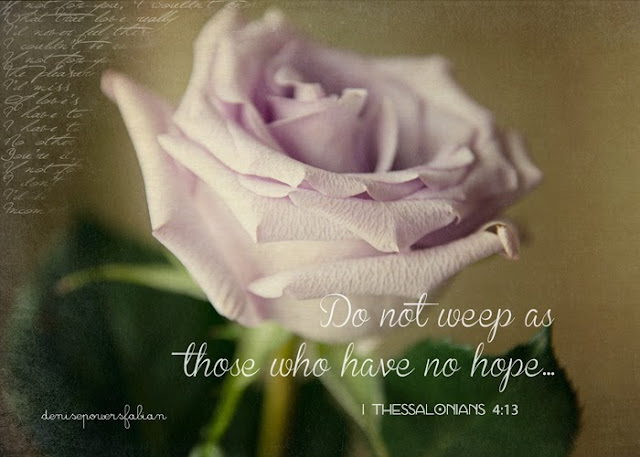 I have fought the good fight,
I have finished the race, and I have remained faithful.
And now the prize awaits me—the crown of righteousness...

I learned this afternoon that the niece of a dear friend went to heaven...the daughter of my daughter's piano teacher...a cousin of someone I watched grow up with my children.  A wife, a mother of three, a daughter, and a shining light of God's grace through the battle of her life with cancer...Allison Kura Armstrong.

It's barely been a month since my mother, Anne Powers, took her last breath...and I chose my image for Texture Tuesday to be from the rose I kept from the spray on her casket.  A wife, a mother of three, a daughter, and also a shining light of God's grace through a 14-year trial enduring Alzheimer's disease.

I have been with loved ones in their final hours before death...including my parents...or as we say where I work, "at their end of life."

As I read the last post from Adam, Allison's husband, and reading tributes written by her Aunt Sue and cousin, Tara...I replayed the July 31-August 1, 2013, being at the bedside of my mother as she finished her race.

While death for us is painful as we see those who love leave us, I believe, as I experienced with my mother at her bedside, that we are privileged to witness a miracle...to be on holy ground.  My finite human mind cannot get its arms around what occurred in that room with my mother...or the room with Allison where her family surrounded her...as death drew near.  I KNOW that realm is more real than the world we see.  Most of all, I know it was the completion of their redemption, the perfection of their faith, God's finished work, the bride and their Bridegroom reaching out to each other...to be separated no more.  A miracle of unfathomable love.

I am ever so grateful to tears to hold on to that same hope and certainty.

Posted by Denise Fabian at 9:43 PM