What's In Your Mind?

Edster and I were driving home, after he picked me up from work...

We are both Baby Boomers born in the late 1950's...and lately we've been enjoying a local AM station that features news on the hour and songs from the 60's and 70's.  (Does anyone remember when most stations were AM...and transistor radios?)

So there we were listening...and I heard this song by Gordon Lightfoot, which inspired this photo: 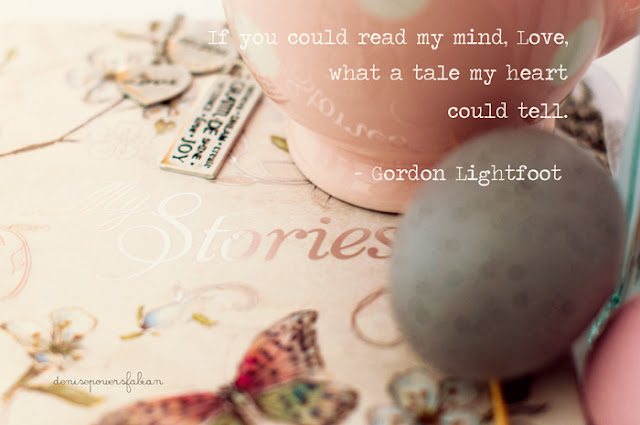 As I've gotten older, I seem to carry more and more in my head...keep things inside versus talking so much.

What tales could your mind tell?  What do you with your tales?  Do you write them down?  Do you use a creative outlet?  Do you tell them to a friend?  Do you let them remain inside for fear no one would understand?  Are these tales full of kind words and support?  Or are they filled with negativity and things that tear you down?  Do they get bigger and almost unmanageable?

But wasn't this written about ages ago by Solomon?

And so, despite my Master's education, it is in an ancient book, one that is "living and active" that holds the keys to the thoughts and tales that weigh us down.

One of my favorite verses is in Lamentations 26:3 that holds one of those secrets...


You keep in perfect peace whose mind is stayed on you, because he trusts in you. (ESV)

And if our thoughts are as powerful as Beck and Ellis assert, the Apostle Paul beat them to the punch:

I came across a great site by accident (yeah, right) called YouVersion.  You can also downoad the app for iPhone, Blackberry, and Android here. They have a variety of reading plans/devotionals.  I found one called, "Battlefield of the Mind" which can be done in 14 days!

I am grateful for God's word that can counter the negative thoughts and "tales" in our heads...that it brings us hope and focuses us into His reality, on which should be our mindset that always brings perfect peace.